Posted on August 7, 2013 by thegreatbelzoni

On Saturday Ahmed had suggested the idea of combining the Temple of Seti and the Tombs of the Nobles with a visit to the local market at Qurna where the people of the west bank did most of their shopping. He felt sure that as a photographer Clive would find it particularly fertile ground and we had arranged to meet at the ferry at eight in the morning. In the event Clive failed to appear despite our waiting by the ferry for an hour. I suspected it was due to his late night drinking habits but when I switched on my mobile later in the day I found he had left a message with a mutual friend to apologise and say he had gone down with a stomach complaint.

While waiting, Ahmed orders us some tea from the vendor by the ferry. The man has an open, smiling face, and he reminds me of someone at home though I can’t put a name to it. For some reason the locals amuse themselves by poking fun at him and he retaliates, but it is all in good humour.  The tea is of the Egyptian variety; sugar but no milk, served in a small glass. Ahmed shows me how to hold the glass at the very rim with finger and thumb to avoid getting burned.

Below the level of the riverside causeway groups of labourers squat together, smoking, waiting for pick-ups to take them to work in the fields. Nearby, a small line of men queue for a serving a fuul, the simple bean stew that has served as the staple of the Egyptian fellahin for centuries. Ahmed points out a quiet-looking middle-aged man who pulls up on a motorbike. “He is a good man, but he made the mistake of falling in love with a Christian girl some years back. He wanted to marry her. It was a notorious case; people still talk about it.” I notice the man keeps his head bowed as he makes his way to the ferry steps, as unobtrusively as possible.

At around nine we decide that Clive is not coming and Ahmed drives us to the market.  A large dusty area among the palm trees and houses, it is an oasis of sound and colour exuding a wonderful feeling of people coming together. Women, mainly in black, many carrying produce and shopping on their heads; men, in contrasting light-coloured galabeyas, some of the younger men and boys in western-style shirts and jeans. Ahmed stops and crouches by the stall of one of his cousins and shows me the difference between potatoes grown in silty and sandy soils. But all the produce is on a large scale, well-shaped and colourful, from a combination of silty soil and ‘nitrochema’. A woman stall-holder secures a sunshade – in the form of an umbrella-like frame made of branches with a piece of carpet laid on top – with a big iron spike.  As ever away from the developed west, the small translucent plastic bag – here in yellow – is king. 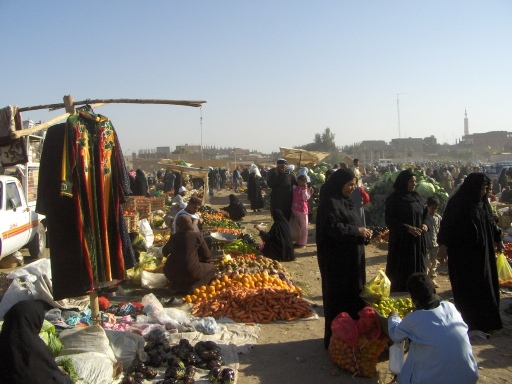 The market at Qurna 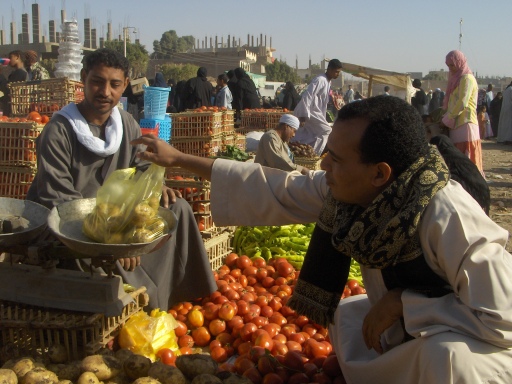 Ahmed buys potatoes from his cousin

Heaps of grains and nuts are piled on sheets on the ground. Next to them are neatly rolled-down hessian sacks of spices and herbs. Men walk past with fowls in baskets or clutched heads-down in their hands. Smaller birds, that look like a cross between a pigeon and a hawk, are tied to the top of the cages. We come to two men selling various types of dried pasta from rolled-down bags on the back of a colourful trailer. The younger of the two advertises the wares with the aid of a microphone and small speaker. Nearby, women gather round a tricycle trailer from which eggs are being sold. On the back it has three small signs advertising ‘Ariel’ washing powder. One stall shows off colourful ladies’ dresses in a pole high above the crowd. A woman in black walks by, somewhat improbably carrying a bag of oranges on her head, as Ahmed stops to buy limes for the two of us from a young lad with a wheelbarrow. 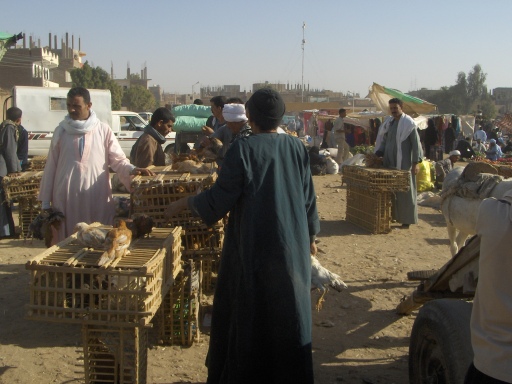 Men walk past with fowls in baskets 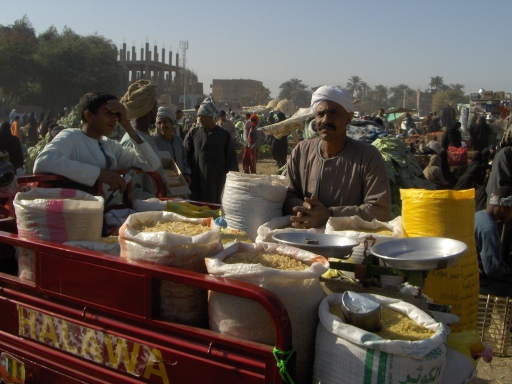 Selling produce from a trailer

A grave-looking man walks around the stalls waving a receptacle of incense on a chain. “It helps ward off the evil eye as well as making things smell nice” Ahmed explains. As we head towards the end of the market area I notice the backdrop is the sacred mountain of Meretseger, el-Qurn, after which the village and its market are named. A young girl sitting on the ground by bags of nuts, henna, and different coloured dyes gives me a warm smile. 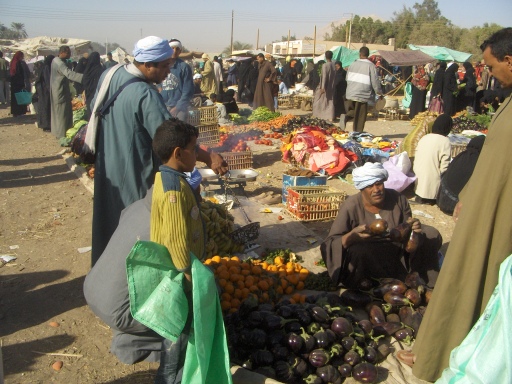 Warding off the evil eye

The girl with the smile

As we return to the car a group of small boys immediately notice an intruder and rush towards me demanding baksheesh. Ahmed shoos them away then offers me one of the bananas he has bought.  “Throw the skin down for that donkey to eat” he says. There are no bins on the edge of the desert. Most of the people who have not walked here have come by donkey and this one is tethered to a telegraph pole while its owner browses the stalls. Younger men ride in pairs on motorbikes. An older man turns up incongruously in a smart new 4×4 and the boys rush around excitedly. Ahmed and I get into his car and we drive the dusty track just round the corner to the three-thousand-year-old Temple of Seti. Anywhere else that would be incongruous. But not in Egypt. 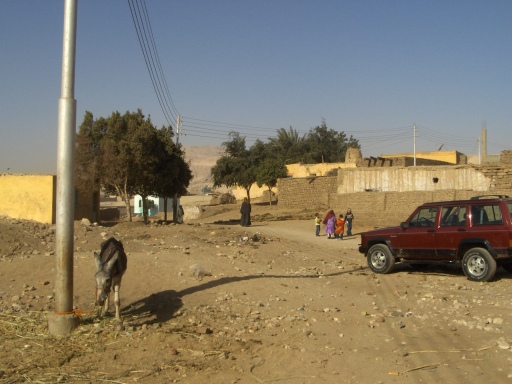 The donkey, the 4×4, and the sacred mountain