Posted on January 3, 2016 by thegreatbelzoni

Following a 5.30 breakfast I head towards the ferry, my breath rising up before me in the cold morning air. One of the men huddled by a brazier offers to call me a taxi and I accept. I’m already behind schedule so there’s no time for bargaining. As I wait I have a moment to reflect on one of the consequences of staying in a hotel for the first time and not my usual self-catering apartment. The lack of self-reliance means that you’re not in complete control of your schedule. It’s a persistent niggle throughout the week.

I’m surprised when at 6.20 a nice, new, gleaming white Toyota 4×4 pulls up. A bit of a change from the usual battered old Peugeot I take up to the Valley. The driver is, according to the flashy logo on the door, “Mr Kind”. At first he comes across as a bit of a showy know-it-all but as we make our way towards the desert I gradually warm to his straight-talking. He seems to sense that I am wondering how much travelling in this relative luxury is going to cost me and casually asks how much I want to pay. I’m amazed when he immediately accepts the price I usually pay for third-class. What with this, and the fact that he is happy to drop me off on the road into the Valley of the Kings as requested, I warm to him all the more. He doesn’t even ask questions when it is obvious I am considering scrambling up the valley side, something very much discouraged by the authorities. Nor when it becomes apparent that I’m not even sure of the place I want him to stop. He’s alright this guy.

I had been up here the previous evening with Ahmed and Thore, and my new Norwegian friend had pointed out a big boulder which was where he usually started his own walks onto the plateau. As I lay awake in my hotel room that night, contemplating the next day’s expedition, I made a last minute decision to start from here instead of my usual climb up on to el Qurn. Despite being unknown to me this route had the potential to cut about an hour off the crossing; not insignificant in the context of a 25-mile walk.

However, now I am here in the gathering morning light I can’t find an obvious route up from the boulder so I do a couple of quick reccies up and down the road, conscious that the longer I spend here the more chance there is of being questioned by the police. My frustration mounts: why hadn’t I marked a waypoint on my GPS when Ahmed had gone out of his way to take me here the day before and Thore had shown me the starting place?? In the event I end up scrambling up a narrow path onto a scree which leads to a blind summit with no obvious way beyond. I stumble and slide back down the loose rock and spend the next forty-five minutes or so route-finding, presumably in the process becoming a topic of conversation for the tourist occupants of one of the morning’s hot air balloons which, having risen from behind an adjacent peak, now hisses and hovers directly above me.

The sun is coming up and I’m aware that I’ve probably already blown it. Eventually (at 7.35 on my watch) I reach a summit that shows the way down – and back – towards the start of the ancient Farshut Road, by the ruined watch-tower, not far from the old quarries on the valley floor. I know it’s going to be difficult to make up the time now and, already quite tired and very sweaty, I’ve drunk a fair bit from the water bladder in my rucksack. But there’s no point beating myself up about it: I’m on the Farshut Road and might as well use this opportunity to familiarise myself with this end of the route.

The going is hard at first, a broad rubble track, and it is probably here that I start to get the blister on the side of my right heel that makes the day’s walking increasingly uncomfortable. But as the trail gradually narrows it becomes a little easier underfoot; the morning light is pure watercolour blue and the views of the Theban hills are spectacular. Any lingering frustration I feel from the messy start is outweighed by my joy at once again being out among these hills. The ecstatic silence is only broken as I reach the crest of the first hill and momentarily find myself in view of the Valley road. Catching sight of a pickup carrying tomb guardians, followed by a tourist police motorcycle, I quickly move away from the edge so as not to attract attention. The route becomes steeper and I become increasingly aware of the weight of the six litres of water I am carrying for the day’s expedition. But even this does nothing to dampen my sense of exhilaration. 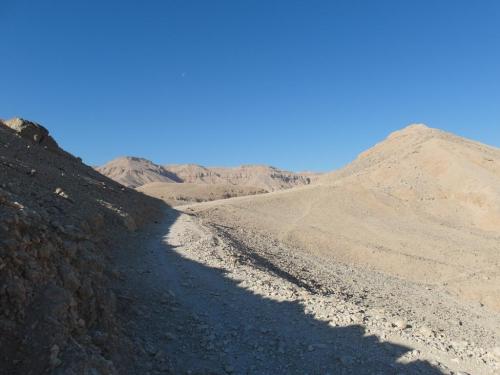 “…as the trail gradually narrows it becomes a little easier underfoot…” 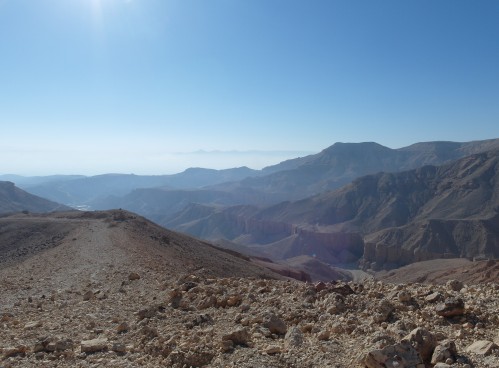 At 8.45 the track meets the one coming up from the northern off-shoot of the western valley. This was the route I had in mind when I first envisaged the plateau crossing, minutely scrutinising Google Earth from the comfort of my study at home. Ahead there is a pyramidal peak, rather like a smaller version of El Qurn, and when I reach it is there is the usual small scramble through a band of harder rock that is encountered on any ascent to the plateau. Beyond the rocky barrier the ground starts to level out and, for the first time in four years, I am back on the Theban plateau. What is it about this desolate place that gives me such a strong sense of being welcomed; why does it make me feel so much at home? 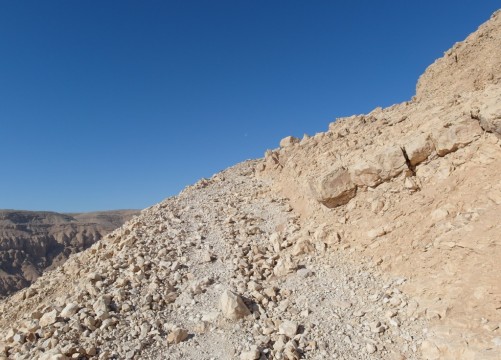 “…the usual small scramble through a band of harder rock…”

“What is it about this desolate place that gives me such a strong sense of being welcomed; why does it make me feel so much at home?”