A First Visit to the Temple of Amun at Karnak

Posted on January 30, 2016 by thegreatbelzoni

It is no exaggeration to say that I had thought, and dreamed, of Karnak pretty regularly since first seeing a picture of the great hypostyle hall in a newspaper supplement while waiting outside a fish and chip shop one day in the Easter holiday, 1972. I remember it well: a car park in Ambleside in the English Lake District, the inevitable rain drizzling down the windscreen, reflecting the amber street lights of early evening. The article was anticipating the forthcoming exhibition of the Treasures of Tutankhamun at the British Museum, and the reason I remember the scene so vividly is that it was the moment I realised that, whatever else I did with my life, one day I would visit Egypt; Luxor; the Valley of the Kings.

In the end, that journey took a lot longer than I had anticipated. From that day aged ten in 1972, my boyhood dreams were of becoming an Egyptologist, and at times that dream became an obsession. But things happen in life, and often not in an order anything like that which your dreaming self had mapped out – new ideas, false starts, changes of perspective, even moments of despair. But as we get older we realise that it is that which first really claimed our attention as children that is destined to become the enduring motif of our lives.

For my own part I hadn’t fully recognised this until one day, a year or so after my brother’s death, my son came home from school and told me that his class had been asked by the teacher to find out if there was anywhere in the world that their parents felt they simply had to go to. He had immediately put up his hand and said “My Dad wants to go to Egypt!” This came as something of a surprise to me when he told me later since I couldn’t remember that I’d let him in on my personal lifetime secret. But I must have done, even if subconsciously.

So here I was, at the top of the ferry steps on the Corniche at Luxor, about to set off for a place that had existed on the east bank of the Nile for over three thousand years and in my imagination for just over thirty-five: The Great Temple of Amun at Karnak.

Because of its significance to me, I wanted to come to Karnak more as a pilgrim than a tourist, so once I was off the ferry I made the mile or so up the Corniche on foot. This Nile-side walk only becomes a hassle later in the day when the Rolex Boys are out in force. Till then there are only the caleche and taxi drivers to contend with and they can do little to disturb the general tranquillity of this wonderful winter stroll. First there are the moored boats to catch the eye, then the gradual change of the west bank from semi-urban to fully rural, a palm-lined river under a wide blue sky that could be a scene from almost anywhere in Africa. The pavement under your feet, however, would be more at home on the French Riviera and it’s this direct coming together of different worlds that gives the riverside promenade, and Luxor in general, its distinctive flavour.

After about mile I am abruptly jolted from my dreamlike state by tripping over a loose block in the paving. As I take my bearings, unable to recognize anything particularly resembling ‘the largest religious complex on earth’ I notice a man beckoning to me and pointing. Not for the first time on my trip I make the unwarranted assumption that this person is about to make an attempt on my wallet. But he simply smiles, calls out ‘Karnak temple?’ and points to a police road block off the main street. I thank him and realise that in my quest for an authentic experience of this, the greatest temple in the world, I have effectively turned up at the tradesman’s entrance. The men on guard appear to be soldiers – but seem far too young to be allowed to carry automatic weapons – and they point to where I should purchase a ticket. I expect this to be somehow in keeping with one of the world’s most popular tourist destinations but in fact the ‘ticket office’ is little more than a garden shed.

Arrival at the entrance to the temple

The recumbent rams that welcome your approach to the temple have something about them of good-natured guard dogs waiting for a pat on the nose. Beyond the first pylon, the organized tour production line becomes immediately apparent, yet so too does the curious fact that it is just that: a line. Step a few yards to the left or right in even the busiest part of the temple and you find yourself in blissful solitude.

I suddenly become aware of having a sphinx-like smile fixed on my own face, a look that at home could have me put away. I am completely in my element. For the previous twenty years of my life, many of my moments of real happiness have come while exploring medieval churches, cathedrals and monasteries; sometimes I was even paid for it. But if Fountains Abbey is the sweet shop, this is a veritable chocolate factory. And as at home, among the remains of a later era, the pleasures of exploring are not just academic – reading inscriptions, recognizing figures and phrases of text – but are in the main purely atmospheric. What gets you high are the shafts of light pouring through an opening in roof stones, the conjunction of carved yellow sandstone, towering palm trees and a deep blue sky. In the case of this particular explorer, at least, sweet dreams are made of this.

At times you don’t know where to look, you are in danger of sensory overload. The best response is to go with the flow, to read the temple as you would a landscape – a sense of real beauty comes through an appreciation of the whole rather than just the particular. Throughout my time in this greatest of temples on Earth the auditory background is the call to prayer and preaching from scores of mosques. At one and the same time this seems fitting and incongruous. It serves to remind you that this is a place in which for centuries mankind has sought to penetrate the most profound mysteries, a quest that continues to this day, albeit in different forms. Yet somehow the continual wailing seems like a desperate attempt to assert a moral authority over what was arguably a far greater civilization and culture of ideas than anything that has come since.

Then suddenly, here it is: the Great Hypostyle Hall. For someone who has spent so long contemplating this place, I am strangely unprepared for its effect on me. It’s not simply a question of scale; personally I would be bored by the tour guides’ endless litany of measurements. But when I look up at the open papyrus tops of the central columns I suddenly feel that I am about to cry and then, on realising that I am not entirely alone, I experience a tinge of embarrassment at such an emotional response in public.

But as I move away from the central production line towards the shaded sanctuary of the temple sides the stones themselves seem to reassure me – it’s all right. I know some people in this place feel an almost overpowering sense of the deliberate obfuscation of a male priesthood. My primary emotion, however, is an intense in-pouring of maternal love and a presence that is recognizably female, a reaction that is particularly unexpected among a forest of towering columns and carvings of so many ithyphallic gods. It is as if I have returned to the very womb of mankind. 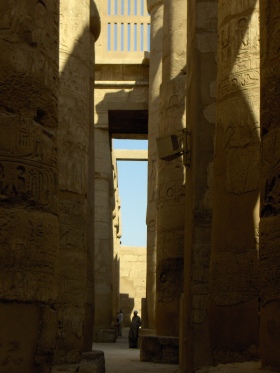